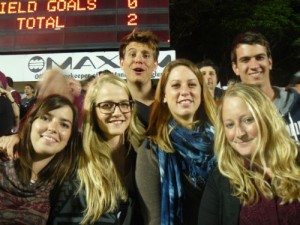 Friday was a great day for the students but not for the Manly Sea Eagles. Twenty of us went to Brookvale Oval to watch rugby live. It was a battle between second and third place and because of this that the stadium was nearly sold out. Most students had never seen rugby league before but the atmosphere was electric and with teacher Dave doing his best to explain some of the rules, everyone had a great time and got some real Aussie culture.

The game was a close affair and both teams were clearly on top form. In the end Manly lost but there were no losers as we all thoroughly enjoyed it and can’t wait to go again. Go Manly!